The Green Gold of skin care

The Tamanu oil comes from 60-foot-tall tropical trees, native to Polynesia and Southeast Asia and belongs to the botanical family of the Guttiferes. It blossoms with small, white flowers with yellow centers twice a year. The fruit smells sweet with a lime-like fragrance and carries a large kernel inside. This kernel provides the oil. 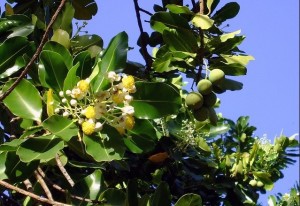 Tamanu is a botanical oddity. Contrary to most other oil producing nuts, the fresh green Tamanu nuts are completely devoid of oil when they first fall from the tree. They need to be exposed to the sun for a few weeks before they turn a brownish color, develop their aromatic odor and finally achieve their full oil capacity. 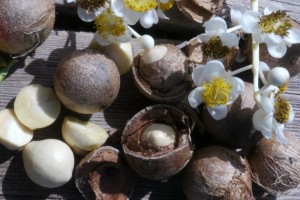 The oil squeezed from the kernels is rich, dark green, and luxurious. Tamanu oil is precious, as it takes about 100 kilograms of fruit—the amount that one tree produces annually—to create just 5 kilograms of cold pressed oil. 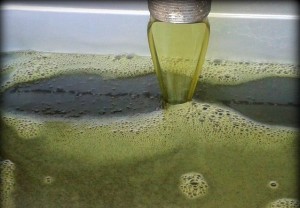 Tamanu oil is applied to the neck to relieve sore throat and is massaged into the skin to relieve neuralgia, rheumatism and sciatica. Tamanu oil is employed by Polynesian women for promoting healthy, clear, blemish-free skin and is also used on babies to prevent diaper rash and skin eruptions.

While oil of tamanu is thick and rich, once it is applied to skin it is readily and completely absorbed. Skin feels smooth and plump, with no oily residue.

Traditionally Tamanu oil has enjoyed topical use for relieving the pain of sciatica, shingles, neuralgia, rheumatism and leprous neuritis, for which it is effective.

In 1918, researchers associated with the French pharmacopoeia began research into Tamanu oil for topical and subcutaneous use. In the 1930s, French researchers investigated this oil for its anti-neuralgic effects and cicatrizing properties.

In the French medical literature on Tamanu oil, several instances of its successful use in cases of severe skin conditions have been reported. In one of the most remarkable instances, a woman was admitted to the St. Louis Hospital in Paris with a large, gangrenous ulcer on her leg, which would not heal. Though doctors were sure that amputation was inevitable, she was given regular dressings of Tamanu oil. The wound eventually healed completely, leaving a smooth, flat scar. In other cases, Tamanu oil has been employed successfully to heal severe burns caused by boiling water, chemicals and x-rays.

Though Tamanu science has been conducted ongoing since the 1920’s, only in the last decade has Tamanu oil gained any market visibility for general use. Much of this market activity is confined to Tahiti, where the oil is marketed for first aid and beauty purposes. Nowadays, Tamanu oil is particularly useful for sensitive, mature and dry skin; for after-sun products and to reduce irritation after shaving, hair removal and on.

Some constituents of Tamanu oil